Dublin Tech Summit is a two day (Wed 18 and Thu 19 April 2018) meetup of startups and business people intended to connect investors to tech companies, and to highlight emerging tech trends.
I attended as a guest of Failte Ireland, and brought two UK attendees to it, to help promote Ireland as a conference destination. 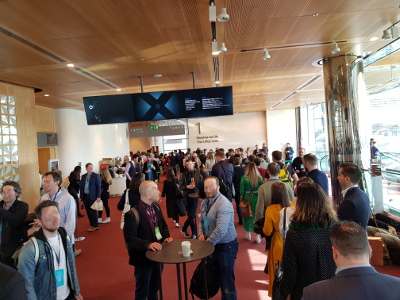 Several side tracks dealt with start-ups, mentoring, and Eir offered a prize of €5,000 for the best startup pitch. This looks like a good event for any tech company at launch or early development. If you can’t afford it, maybe (in Ireland) talk to your LEO (Local Enterprise Office) for support, or the equivalent in other countries. For example,  La French Tech, an initiative of Business France, featuring Kuzzle, Axione, Qare, and Keymetrics. I saw a number of other stands from French companies; one that caught my eye was Myoeno.com, a wine scanner device to measure oenological characteristics.

My opinions (and bear in mind I’m probably not its target market):
It is not a training event, there were no real techie or “how to” presentations, but an educational / product promotional event in a general sense loaded with “fantastic / incredible / amazing” buzzwords and hype. I understand that slides will be available later.
The schedule only gave speaker names and very few descriptions of what the talks were about. This did not improve as the event grew closer, so it became clear that speakers were chosen for being able to give engaging and fluent presentations, and not for promising any useful content. The general sense is of watching an animated magazine article. The panel sessions featured experts, including local ones such as Brian Honan, but the limited time meant that topics were necessarily high-level discussions rather than informative.

Quantum Computing, Bo Ewald, D-Wave systems: because many terms were used without definitions or examples, like “annealing”, this would have made more sense to me if I had known more about the topic, but the 2017 story of China communicating with a satellite using “entangled” photons was interesting.

The Publishing Revolution session spoke of developments in eBooks and interactive learning and self-publishing.

Fred Laluyaux of Aera spoke of the “self-driving” enterprise. Their solution to integration and interoperability of 140 separate IT systems is to introduce a 141st and link every other one to it to create a “digital twin” to capture corporate memory. Maintenance, anyone?

The MusicXTech events were in large nearly empty rooms, where other tracks were packed out. 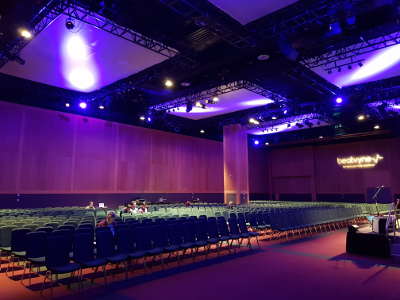 One MusicXTech session interested me, on “The Visualisation of Music” but the schedule had no information on the speaker and no abstract. I tweeted the organisers asking for more info but got no reply. I went anyway but it was nothing to do with the visualisation either of musical or music notation, but rather a look back of how the early augmented reality scenes in the Gorillaz ‘Humanz’ app were created by B-Reel and how it’s much easier now. A bit of pop history, maybe.

The Casey Neistat session was entitled “How to be heard” but he gave no “how to” information at all – in fact, disclaimed it. It was simply the story of his YouTuber career and probably interested people in media.

Jason Zander of Microsoft described the Azure eco system – he began by saying that at a dev conference the first thing he’d do is launch into Visual Studio so that sounds more like my kind of event.

At the panel on Bitcoin, an audience show of hands showed that more than 50% claimed to own Bitcoin. They expect the performance problems to be addressed someday – currently BTC handles 7 transactions per second but Visa handle 24,000 tps.

A session entitled “The Future is Dominated by Customer Experience​” sounded promising but again came across as a rehash of fairly obvious “customer first” assertions. It might have been of more interest to discuss why this does not actually happen in practice, what the motivations are that result in CX failure. Like the app for this event.

Jordan Bitterman of IBM described current applications of AI. He gave examples like Shazam for song recognition, “Do not pay” to challenge parking tickets, and voice recognition identifying which adolescents showed mental health risks. He also reported on using location data to infer possible forced migration of refugees before they are washed up on shore.

The Grip App for the event was my Gripe App because it was useless for planning my attendance. It had networking features but nobody I clicked as “interested” responded, perhaps because of the thousands of attendees, the few they chose to show me were not particularly relevant. They trumpet the “AI” aspect without saying what that means – probably just dumb text matching between stated interests. There is no search option in the Grip app. Well, there is but when I typed in the name of a speaker I was interested in hearing I got one result dated 1st April 2016 and no further info.
The only way to view the schedule is to select one track, then one day, then scroll down, tap the down arrow beside each session title in turn to see who the speakers are and any description, read it to see if it’s what you want, and if not then scroll down more and repeat. And repeat all that for the next day. And repeat all that for each of the four tracks. What a crock.
If anyone designing the app had much experience of attending a conference they would know the top task is to select which sessions to attend in which tracks.
I need an overview of the whole schedule with detail of all the talks. If I tap on a speaker, I want to see what sessions they are in and when and where.
There is a grid overview offered but most of the time it does not download. (I subsequently learned that was due to demand throttling.) And when it did, it was view-only in the reader, it could not be saved on my device so I would not have to download again. The smart solution is to print the schedule yourself before coming.
Or as some do, take a picture of the session displays on the screens outside the rooms. And do it while it’s on show – part of the time it wipes away and come back, for no discernable reason except to frustrate the reader.
A simple backup system for the organisers would have been to give everyone an A4 sheet with the parallel sesssions listed, to enable planning.
On the second day I took the time to scroll the schedule early morning and write down my choices on paper.

Patrick provides consultancy and training in spreadsheet development, auditing / testing and model review; and the Excel addin XLtest
View all posts by Patrick O'Beirne, spreadsheet auditor →
This entry was posted in Uncategorized. Bookmark the permalink.